Focus on MMA for Children and Youth Development in Belize

Over the last few years, MMA (mixed martial arts) has become an increasingly popular sport in Belize, both for youth and adults. Throughout the country, MMA clubs are popping up, including the very popular Western Elite Martial Arts Club (WEMAC) in Benque Viejo, Belize. Dr. Pedro Villegas, president of the Western Elite Martial Arts Club, spoke about the importance and need for martial arts in Belizean society, stating, “By using MMA lessons to assist children within our communities in Belize, we can teach them to cope with the stress of the harsh conditions in their communities while instilling discipline and control.” The Boys with their Equipment Practicing Outdoors

An Initiative to Prioritize Belizean Children

One of WEMAC’s goals is to provide a safe place for children living in communities affected by crime violence to learn sports like kickboxing and mixed martial arts instead of turning to drugs and gangs which are prevalent throughout communities in Belize. In addition to the athletic skills that students learn at WEMAC, there is also a strong emphasis on education and personal development as a means of helping students overcome everyday challenges through discipline and self-control.

In 2019, WEMAC joined the World Federation on Elite Martial Arts (WFM) as well as the Panamerican Association of Martial Arts (APAM). After being inducted into the WFM, Klinger de Souza Araujo, vice-president of WFM, stated that “WFM fully believes that Belize should be concentrating its focus on children and youth development” and the work that WEMAC does falls directly in line with this focus. 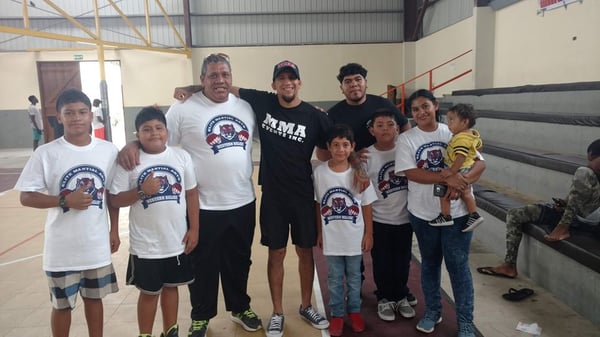 On November 30th, the United Nations will celebrate the 30th anniversary of the UN Convention on the Rights of the Child (CRC). Belize was the fifth country to ratify the CRC, and it is evident through the work of groups and individuals like Dr. Pedro Villegas and the Western Elite Martial Arts Club, that Belize continues to make children a priority.

WEMAC's Long-term Goal for the Sport in Belize

Master Jorge Zeki, president of APAM visited Belize in August and during a visit to WEMAC, stated, “If we can help lay those sustained foundations for growing the next generation of practitioners and competitors, then we will be helping WEMAC achieve some of their key goals”.

In addition to continuing to provide a safe space for children in the Benque Viejo area of Belize, WEMAC’s long term goals include establishing an MMA club within the Belize Police Department as well as a combat sports training facility at Belize’s military bases. Dr. Villegas of WEMAC emphasized that in order to continue to grow and reach their goals, they need the support of the greater Belizean community. He notes that, “The team in Belize are dedicated and enthusiastic despite having some limitations.”

Though not yet an Olympic sport, MMA enthusiast and practitioners hope that in the not so distant future that it will become an Olympic sport. For now, Belize’s MMA athletes are continuing to practice their skills in preparation for the World Championship on Mixed Martial Arts, which Belize will host in November 2020.

By then, MMA clubs around Belize, including WEMAC, hope to be producing MMA athletes that can join the ranks of Belizean athletes like Marion Jones and Albert Morales.

*WEMAC was featured in The Belize Times on October 20, 2019 printed edition, Page 19. Visit WEMAC's website and or follow them on Facebook for more news about this great initiative. You can also make a difference by donating to this Sports Project that works in favor of children and youths in Belize.