Testimonials from Our Guests

What brought me to Belize and more specifically to the Baymen Garden Condominiums? A year ago I lost my wife after a 7 month battle with gall bladder cancer. I took an early retirement to maximize our time together and care for her. Financially the timing couldn't have been worse. The recession and medical bills vaporized a large portion of my retirement funds. The unemployment situation made getting back into the workforce an unlikely option. And, to add insult to injury, the real estate values in Las Vegas plunged. My nest egg was more like a quail egg than an ostrich egg.

Having attended an International Living convention in Vegas, I latched on to the concept of stretching your retirement dollars by living in Central America. This convention also afforded me the opportunity to meet Ann Kuffner, who was there representing Grand Baymen Belize. I have always had seven league boots; and enjoyed the chance to meet new people, see new places, and do new things which travel provides. With the loss of my dear wife and having retired, it was time to start a new chapter in my life.

Ann did such a good job talking up Belize that I decided to initiate my new plan by attending a Chill Weekend in December (2009) on Ambergris Caye, a Caribbean island off Belize. Ann and her husband, Mike, were the ideal hosts and tour guides. It didn't take long to fall in love with the place. Everyone smiles and everyone is happy. Gridlock consists of two golf carts and a bicycle at a 4-way intersection going nowhere because each is yielding the right of way to the other two. Road rage is exemplified by someone not smiling as they wave hello. Flip flops, cutoffs, and a T-shirt are considered one step below formal attire. How could anyone not love the laid back lifestyle?

Having lived for 4 years on St. Croix, USVI, I'm familar with Caribbean real estate. The pre-construction prices for the Baymen Garden Condominiums are so reasonable I couldn't pass up the opportunity. Was I swayed by the people I met during the Chill Weekend? You bet. Was I influenced by being wined, dined, and pampered by Ann and Mike? You bet. Was I impressed with the variety of things to do, on both the Island and the mainland? Certainly. But the thing which convinced me most, was the reasonable cost of the condo.

My game plan is to move to Ambergris Caye and get to know the people and the Island. At the same time I'll hone my Spanish in an environment in which I won't have to depend on it, since English is the official language of Belize. Then, using Ambergris Caye as my base, I will strike out to explore the rest of Central America. I'll spend a couple months somewhere then return to Belize for a week or two vacation before exploring my next town. I will continue this rotation until I decide where I want to live permanently. Who knows, I may end up on Ambergris Caye permanently. Another large plus on behalf of Baymen Garden is the fact that they have a very generous rental management program for the time you are not using your condo.

I feel quite excited having taken the first step into the new chapter of my life. I am anxious now to see what the future may hold in store.

My husband Ed and I visited Ambergris Caye a little more than a year ago.  At that time we never dreamed that that beautiful Caye would be our new permanent home! At age... 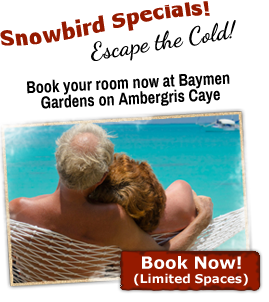