LobsterFest in Belize is a wildly popular culinary scene that turns Belize into one great-big-crustacean-event. It’s kind of like a New Orleans’ “Mardi-Gras” for all the lobster debauchery going on, but the celebration is much tamer than Fat Tuesday and lasts for about a week. This year, LobsterFest in Belize kicked off on June 15 and ended July 2.

ECI Development's, CEO, Michael K. Cobb was recently interviewed by Canada's well-known publication, The Globe and Mail. He comments on how Belize is already one of the more popular destinations for Canadian buyers, particularly on Ambergris Caye. You won't believe some of the other popular locations.

On June 15, 2018, Copa Airlines, in conjunction with Tropic Air, held a press conference at the Sunbreeze Hotel on Ambergris Caye, Belize. The purpose was to release the Inter-Line Agreement between the two airlines.

The secret has gotten out that Belize is one of the world’s top dive destinations! As the largest reef in the Western Hemisphere, Belize’s reef system is truly incomparable. With its wide variety of corals, fish, crustaceans, and mammals, the waters of Belize are alive with diversity.

As Belize continues to grow in both population and tourism, finding methods to implement renewable energy in the development sector become ever more important. Mother Nature steps in. 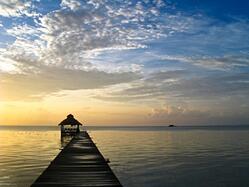 Only a quick, 2-hour flight from Houston and Miami, and just 3 hours from Atlanta, Belize is the Eastern neighbor to both Mexico and Guatemala on the coast of the Caribbean Sea. At 8,867 square miles, or 174 miles long by 68 miles wide, it’s one of the tiniest countries on earth.

As the summer clock begins to tick away, I look back on some of the celebrations and highlights that this summer in Belize has brought. The country of Belize may not be very big but they sure know how to pack a big punch. And they are a force to be reckoned with when it comes to great causes, delicious cuisine, and spectacular beauty. It's no wonder why Canadians, Americans, and many others, enjoy living in this Caribbean paradise.

Beginning with LobsterFest in June, Belize kicked off yet another fun-filled season with its annual, week-long lobster celebration that takes place in three geographic areas of Belize. Local chefs in these three villages of Belize never seem to run out of culinary ideas when it comes to preparing and presenting lobster. From reggae concerts, to lobster costume competitions, to the crowning of Miss Lobster, (and of course all-you-can-eat lobster dishes and lobster cocktails), visiting Belize during this crustacean crusade is a surefire way to kick your summer off. Lobster-style.

A very important highlight in Belize happened on June 15, when Copa Airlines, in conjunction with Tropic Air, held a press conference at the Sunbreeze Hotel in Ambergris Caye. The purpose was to release the Inter-Line Agreement between the two airlines. In a nutshell, this agreement allows for booking a trip to San Pedro on one ticket. This is a huge step in Belize’s tourism industry since it will not only make booking a flight more convenient, but also much simpler.

How exciting to have National Geographic highlight Belize by giving this incredible country its own chapter in the upcoming travel book “Top 50 Best Dive Destinations”. Set to be released in 2020, the book will highlight Belize for its spectacular diving as well as its conservation and protection efforts that the country has implemented in order to keep the reef and marine life healthy and thriving.

Many folks don’t realize how easily accessible Belize is to the U.S. and Canada. It’s the Eastern neighbor to Mexico and Guatemala and is about the size of New Hampshire. Belize is home to the second largest reef system in the world, and there’s no shortage of natural and ancient beauty in this English-speaking country. But much of the beauty here is still relatively unknown, a great highlight indeed.