History of the Garifuna in Belize

Belize has a history and population that is rich in diversity. Within Belize, there are eight distinct ethnic groups that each bring their own history, language, and culture. One of these groups is the Garifuna people who primarily inhabit the Caribbean coastal communities of Belize.

The history of the Garifuna people began over 400 years ago when South American Carib Indians migrated up to the Caribbean island of St. Vincent. The primary goal of this migration was for the Carib Indians to conquer the Arawak Indians, who were the original inhabitants of the island.

Later, in 1635, two Spanish ships carrying West and Central African slaves from Africa to the West Indies ran ashore in St. Vincent. Those that survived stayed in St. Vincent and lived among the Carib Indians. For nearly 2 centuries, the Carib Indians and descendants of African slaves intermarried and created what is now known as the Garifuna ethnic group, or Black Carib.

Today, the Garifuna people are a thriving population in the country of Belize. Having successfully preserved much of their cultural heritage, the Garifuna language, dance, and music were declared to be a “Masterpiece of the Oral and Intangible Heritage of Humanity” in 2001 by UNESCO. Music and dance are central to the Garifuna culture, with a heavy focus on drumming. Traditional Garifuna has also evolved into a more modern version, called Punta and the even more modern, “Punta Rock”, which incorporates traditional drumming with modern lyrics and instruments. In addition to the music, dance is an integral part of the Garifuna culture, stemming from its West African origins.  Popular forms of Garifuna dance include Punta, Chumba, HunguHungu, and Jankunu. Each type of dance tells a different story of the Garifuna people history.

Another important part of the Garifuna culture is the food. Garifuna cuisine is rich in flavor and most commonly consists of fish, cassava, coconut, and plantains. The most common served along Garifuna meal is Hudut, which is mashed plantain or yam, served alongside Sere which is a coconut-based fish stew served with cassava bread.

If you have ever attended Grand Baymen’s “Taste of the Caye” event you’ve likely gotten to see and hear dances and songs performed by the Charikanari Dance Group, led by Ms. Julia Martinez. Attendees to the culinary events have been able to enjoy delights from San Pedro’s Garifuna restaurant, Black & White, including sere, coconut sweets, cassava bread, and more, as well as the opportunity to chat with both the dancers, musicians, and restaurant owner.

Planning a trip to Belize this fall? Visit Grand Baymen in November and join us for the next Taste of the Caye event, and experience Garifuna culture up close and personally. 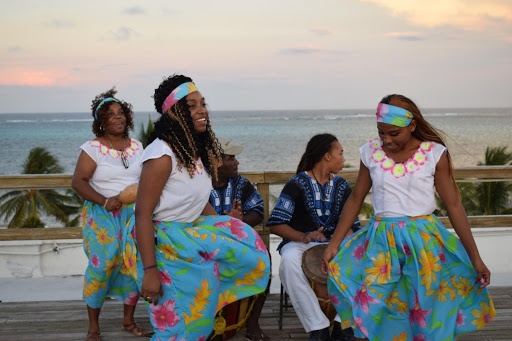