Prince Harry visits Belize. The queen is on the money so it is fitting that her grandson would come and enjoy the company of many fine Belizian folks in the final year of the Mayan calendar. I guess Belize was on his bucket list and he wanted to see the country before the end of the world. We're glad he came and had a good time. Although he didn't make it out to visit Grand Baymen, we have an open invitation for him to come stay and enjoy an island vacation on his next trip.

HRH Prince Henry of Wales ended his tour of Belize on Saturday March 3rd after visiting the western part of the country amongst other activities. Prince Harry was able to interact with hundreds of Belizeans at a street party in Belmopan on Friday night where he took the opportunity to dance traditional Belizean Âbruk dungÂ and Junkanoo. After his lively Friday night, the energetic and enthusiastic Prince visited the Adjacency Zone set up by the Organization of American States Office between the Belize-Guatemala Boarder. 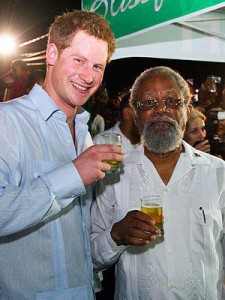 At the Zone, Prince Harry was able to enjoy a presentation by the OAS ChildrenÂs Program that is in place for the children living along the Belize-Guatemala Boarder. Prince Harry also got the opportunity to view colourful art pieces by the same program and cultural presentations. Belize and Guatemala restarted dialogue in 2000 over the Belize-Guatemala territorial dispute and the OAS office along the border was set up to oversee and monitor activities along the borderline of the countries.

Activities at the Belize ÂGuatemala Border came to a temporary halt as the Prince toured the area. Flags of both countries adorned the area as children and young people displayed their musical talent to Prince Harry.

Following his visit to the Adjacency Zone, Prince Harry departed to the ancient Maya Ruin of Xunantunich in the village of Succotz in the Cayo District. His visit to the ancient Mayan temple is not only symbolic but coincides with the year of the Maya and the theme of Belize Tourism Board which is looking forward to capitalize the 2012 year to attract an increase in tourism to Belize. At Xunantunich, Prince Harry climbed El Castillo, the highest temple at the Xunantunich Archaeological Site. The Prince was entertained at Xunantunich by the Deer Dancers, as well as the Succotz Marching Band. He also got the opportunity to meet a few female models showcasing hand-made clothing from recycled materials courtesy of Joris Hendrik. HRH Henry of Wales was also tasked with presenting a special hand carved wooden canoe to the Belikin team competing in the 2012 Ruta Maya. The dugout canoe was a beautifully crafted water vessel that included the special emblem of the QueenÂs Diamond Jubilee.

After being served a traditional Maya meal, which included Pork Pibil, the Prince visited Price Barracks in Ladyville, the base of the Belize Defence Force. He inspected a Guard of Honour and was given an overview of the operations of the BDF. He also got to meet elements of the Belize National Coast Guard and got the opportunity to climb their vessels. Prince Harry also visited the remaining members of BATSUB (British Army Training Support Unit Belize) in Belize. Before leaving the military base, Prince Harry laid a wreath at a monument erected for all the decease British Soldiers while on duty in Belize. He also took the opportunity to meet members of the Ex-Servicemen League.

In speaking to the Belize Press Office, Prince Harry explained that the best memory he is taking is Âthe people of Belize.Â The Prince said that Âthe welcome I received, it feels like I have been here for a week. The music, the people, the culture is incredible.Â He also explained that Xunantunich is ÂfantasticÂ and Âthe view is incredibly amazing.Â Prince Harry said he is looking forward to visit Belize on a vacation hopefully Ânot with all the cameras.Â

Prince Harry left Phillip Goldson International Airport at 4PM on his way to the Bahamas to continue his tour to the Central American and Caribbean countries on his itinerary.

In 1996, Michael K. Cobb and his business partner formed a company, Exotic Caye International, to provide loans to North Americans purchasing properties in Belize, Honduras, Costa Rica, and throughout the region. With a strong focus on consumer need, Mr. Cobb accurately predicted the growing demand for high quality, residential product for North American "baby boomer" retirees in the region. He led the group into real estate development and created a holding company called ECI Development for several properties, including a resort on Ambergris Caye, Belize. Michael speaks at dozens of international conferences annually about offshore real estate finance, development, and ownership. He was a consultant to The Oxford Club, hosted a weekly radio program, contributes regularly to overseas publications, sits on the board of several international companies, gives counsel to various real estate projects throughout Central America, and serves on the Board of Directors and the President’s Advisory Group for the National Association of Realtors, NAR.