ItÂs only November 11th, but already three Baymen Garden owners have dropped in this month. Today IÂd like to introduce you to a delightful couple who are Baymen Garden owners. They recently visited, to check on the progress of their handicap access condo unit in Building A. 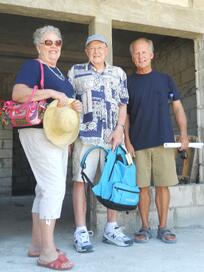 Jim and Mary Eckart initially visited Belize to attend one of our joint financial investment conferences. Â They immediately fell in love with the simple, laid-back life of San Pedro, as well as the friendliness of the local residents. They liked the Caye so much that they bought a Baymen Garden condo on that trip.

This lively couple is in their golden years. Although over 70, they arenÂt the ones who need handicap access. Jim and Mary have three children and four grandchildren. One of their grandchildren, James, has cerebral palsy. He lives life in a wheel chair.

Jim and Mary decided it was time to come view their unit and to also enjoy the comfortable Caribbean fall weather. We introduced them to our on-site construction manager, John Morgan. Â John walked them through the building and their unit, which is now well underway. Â And we discussed JimÂs lengthy list of questionsÂ There were a few decisions we needed to address, concerning the handicap modifications. (Click here for a recent update on Building A progress...)

Mike and I really enjoy getting to know Baymen Garden owners. Â After all, soon weÂll all be neighbors. Jim and Mary are a delightful couple. TheyÂve been retired for more than 15 years, so are well into their golden years... But they travel the world whenever they can. They recently sent us e-mail messages from their IPad, while bopping around London and ParisÂ

Jim spent 30 years of active duty in the Navy. Â He was an aircraft carrier aviator. Jim was promoted to Captain during his first tour in the Naval Air Systems Command. So, we werenÂt surprised that heÂs very detail oriented and with it.

Jim was deployed as a pilot in a squadron on carriers, such as the Shangri-La. Â During his Naval career he spent time in Saigon, the Gulf of Tonkin, and other locations off the beaten pathÂ You get the picture. Â Clearly, heÂs traveled the world. But now heÂs travelling as a tourist, rather than a fighter pilot.

Mary is charming, but with a wicked sense of humor. Like so many Navy wives, sheÂs tough and resilient - Â used to moving around and living without a husband who's often out to seaÂ Mary always has a twinkle in her eye, and an irrepressible zest for life. ItÂs clear that Mary and Jim are relishing their golden years. ItÂs a pleasure to watch this couple living life to the fullest.

Late in his Naval career, Jim spent ten years Âflying a deskÂ in the Naval Air Systems Command. He worked in Arlington, VA, and in the Pentagon. First he was on the staff of the Chief of Naval Operations. Later he moved to the Office of the Secretary of Defense. Then he retired from the Navy.

In 1989 Jim and Mary retired completely. They are looking forward to having their kids and grandkids visit them at Baymen Garden. Their two bedroom, two bath unit overlooks the pool. They are anxious to settle in and enjoy the pool and sunset views with their extended family and new friends, as soon as Building A is finishedÂ

There are still a few units left at Baymen Garden, in Building A. Â If you would like more information, click hereÂ Then you'll also meet the delightful neighbors, as wellÂ