On September 21st, BelizeÂs 30th year of independence, Prime Minister Dean Barrow addressed the nation. Â The good news he presented for the country also bodes well for expats living and investing in Belize. Â He proudly reviewed BelizeÂs upbeat economic indicators report for 2011. Â Then he outlined the aggressive infrastructure improvement program already underway. This program does more than Â improve BelizeÂs infrastructure. ItÂs creating jobs for many Belizeans who would otherwise be unemployed.

The Prime MinisterÂs address is available on the Belize governmentÂs public website. Since itÂs rather long, IÂve quoted the relevant economic parts of his speech in this post. The quoted sections below Â address the solid jump in the GDP, the basis for the countryÂs zero % inflation rate, and the numerous infrastructure projects now underway. For expats and investors, these projects demonstrate that the government of Belize is committed to upgrading their amenities to better attract the Â tourist market and Baby Boomer retirees.

If you would like to read the entire speech, click hereÂÂ You can also compare these statistics to the ones presented in an earlier post by clicking hereÂ

Here are the excerpts from Prime Minister BarrowÂs speech that address economic issues:

"Well, when we look at the numbers we can certainly take satisfaction in theÂ fact that for the first quarter of this year our GDP growth exceeded 6%. It isÂ around a decade since we last saw that figure and local analysts declareÂ that, in current world circumstances, it is an extraordinary statistic. 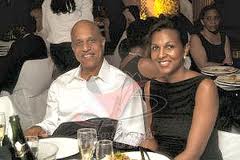 Now it is already clear that the second quarter, for which the official figures are not yet in, was more subdued. But we are still on track for year-on-year growth of notÂ less than 3%. And even those costive Scrooges at the International MonetaryÂ Fund have been obliged to concede that "Belize is weathering the financialÂ crisis relatively well, when compared with CARICOM peers".

There is a mix of factors responsible for our economic growth, and highÂ export earnings from our production of crude oil is one. But, what is far moreÂ sustainable, our job-creating tourism star is firmly in the ascendant. Thus,Â there was a 6.7% increase in second quarter overnight visitors to Belize,Â anchored by a 16% jump in the month of April. And for the first half of this year, hotel revenues rose by 17.8%.

Now the legitimate query in the face of impressive growth numbers is alwaysÂ Âhow does higher output benefit the regular citizen and improve the quality ofÂ LifeÂ? It is in that context that we were pleased to have both the Fund and theÂ Central Bank of Belize confirm that inflation was nil in 2010. In other words,Â there was no cost of living increase over the last calendar year. And this wasÂ as a direct result of Government's cancellation of both import duty and GSTÂ on a wide range of food items.

But however much we have been able to rein in the price of basic goods; ourÂ citizens still need money with which to buy. They therefore need the jobs toÂ provide them with purchasing power.Â Now the United States is the world's largest economy. But even in AmericaÂ joblessness is stubbornly high, and their underemployment rate is about theÂ same as Belize's unemployment rate. Accordingly, President Obama hasÂ decided to focus great effort now on infrastructure development as a driver ofÂ jobs.

Well, you will forgive me for underlining the fact that in this regard BelizeÂ is ahead of the curve. Ever since the onset of the global recession we haveÂ declared our concentration on infrastructure spending to be the centerpieceÂ of our public sector investment programme. Most of our engagement with theÂ multilateral development agencies has Â therefore been by way ofÂ infrastructure projects, and our agenda in that regard is now well advanced.Â Thus, the improvement of the Northern road network to paving standardsÂ proceeds apace with the recent award of the contract for the resurfacing thatÂ is taking place between Orange Walk Town and Progresso. And the secondÂ phase of the project going in the other direction to Blue Creek, and betweenÂ the villages of San Lazaro and August PineRidge, is to start shortly.

In the South the work on the Punta Gorda to Jalacte road is well in hand. AndÂ in the West the contract is Â out to tender now for 10 million dollars worth ofÂ approach roads that will be built. This is in connection with the new MacalÂ River crossing to replace the Hawkesworth Bridge. Â And it is only the firstÂ component in what is, altogether, a 50 million dollar project. 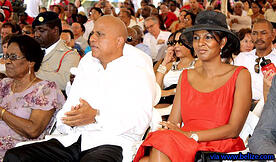 The work has begun in Belize City on the last phase of the Marion JonesÂ stadium, and our friend President CalderÃ³n and the Mexican GovernmentÂ have confirmed that it is 15 million dollars that will be spent on their gift to us,Â the reconstruction of the Belize City Center.

The 10 million dollar IDB loan for drainage works and street repairs on the Northside of Belize City has already been signed, and the actual commencement will be by year's end.

Ground has been broken in San Ignacio for the new welcome center underÂ Government's IDB-funded Sustainable Tourism Project. And all DistrictÂ Towns are readying for the November start of the Municipal InfrastructureÂ Project.

Capital City Belmopan will receive a double dose of bounty, as EUÂ funding for a new market is in addition to the World Bank money for streetsÂ and drains.

Ladies and Gentlemen: this is a panorama of projects that are all labour intensive, and that have brought and will bring jobs to all the compass points of our country.

I also want to announce that by way of a European Union grant and the provision of counterpart funds by the Government of Belize, BEL (BelizeÂs public power company) will begin to provide electrification to 44 rural and peri-urban communities countrywide. "