Celebrating the Life of George Price - The Father of Belize

September 21st, 2011, is a day of joyful celebration in Belize.Â It marks BelizeÂs 30th year as an independent, sovereign nation. But this week of lively celebrations has been dampened by a simultaneous event of great sadness. The architect of the independent nation of Belize, the Right Honorable George Price, passed away on September 19th, at the age of 92. Â George Price dedicated his life to establishing BelizeÂs political and economic independence.

In his youth, George trained to become a Roman Catholic priest. But circumstances prevented him from finishing his training.Â External events led him in an alternate direction. But his belief in peace, equality, and democracy was established during those formative years. He was a man strongly committed to the principles of Christian democracy and nationalism. His long-term goal, to maintain this region as an oasis of peace, is unequivocal.

Below is a description of the Right Honorable Mr. Price that effectively captures the spirit of this gentle giant of a man, often praised for his humility. Â Ironically, this contribution comes from John Briceno, the leader of the opposing political party:

ÂMr. Price, as he was fondly called the Father of the Nation, was a man who did a lot for this country; he gave his entire life for Belize. From the time he started the nationalist movement in 1950 he never stopped working for Belize a single day of his life. But at the same time, whilst we are saddened by his death, I think it is time for us to celebrate what he stood for.

So we need to celebrate what he stood for; the humility that he had in public service, he was the best example that one can see. I am sure that he must be looking at us from Heaven, he was a very spiritual man, Catholic, and I am sure he is in the other world that the Lord promised all of us. I am sure he must be looking at us and wondering what is the big deal because he was such a humble person, but it is a big deal for us. HeÂs the Father of the nation. There will never be another George Price.Â We are going to be eternally grateful for all the unselfish work that he did and he gave to this country known as Belize.ÂÂ 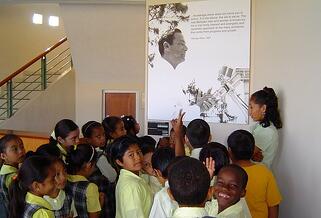 George Price was dedicated to BelizeÂs political liberation from Britain. He was a founding member of the People's United Party in 1950. Â Over a period of decades, he led the efforts that cleared the path to BelizeÂs political independence in 1981. Â And although a hesitant politician, he went on to become the First Premier, and the Prime Minister of Belize.

Prime Minister Price understood BelizeÂs strategic geographic location at a time when Belize was but a fledgling, backwater country.Â He understood the importance of expanding BelizeÂs connections beyond those of Britain.Â He consistently pursued the development of external relations with North America, Mexico and Central America, as well as the English-speaking Caribbean.Â In so doing, he achieved his goal of increasing BelizeÂs economic development and geo-political options.

George led Belize from a 3rd world country to transition towards a 20th Century, modern country. Â He supported the expansion of development, infrastructure and education. And he positioned Belize to become a unifying force in the Central America/Caribbean region.

For his lifetime of dedication to Belize, Price became the first person to receive BelizeÂs highest honor, the Order of National Hero, in 2000.Â Click here for a longer description of his lifeÂ