This Owner Is Anxious to Move to Ambergris Caye!

After a person invests in a pre-construction condominium on our Isla Bonita paradise, they are often anxious for their unit to be finished so that they can move in. Â Take Baymen Garden owner, Jim Knuff, for instance... At the time Jim bought his unit in Baymen Garden's Building A, he was getting ready to sell his Las Vegas home. Â It didn't sell overnight. Â But once it did, he was chomping at the bit to live the Caribbean island lifestyle on Ambergris Caye. 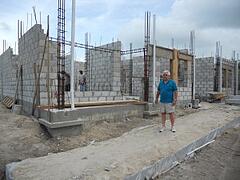 Jim was one of the first investors in Baymen Garden, Grand BaymenÂs garden condominium community. Â Construction of Building A is now well underway.Â So this week Jim visited us on Ambergris Caye, to check in on his future home.Â Bottom line - he decided itÂs time to move to Ambergris Caye.

Since JimÂs unit isnÂt ready yet, heÂs decided that itÂs worth it to rent for a while.Â One purpose for his trip was to start looking for a short-term rental.Â HeÂll live there until his unit is finished, around June 2012.Â And, he wanted to start working on his QRP residency application, setting up ban accounts, and other tasks that are part of a major move.

Getting to Know Our Future Neighbor

It was a pleasure to get to know Jim better.Â We had only spent time with him at a conference and the Chill Weekend he attended.Â HeÂs one of those laid back kind of guys that are full of surprises. Â Easy going and non-assuming, he's not not at all a macho kind of guy. Â So I was quite surprised to learn that he'd been a deep sea construction diver.Â He worked in the North Sea, Africa and Asia, mainly doing oil rig related diving. Â This type of diving pays well, but is a high risk, dangerous way to make a living. Â So, after a Â number of years, he shifted to working on the ocean-based oil drill rigs themselves. Again, he worked in world-wide locations.

After marrying, Jim and his wife Trish lived in the Philippines, and later in St. Croix.Â So heÂs no stranger to the overseas lifestyle.Â He and Trish owned an import/export business for ten years.Â Much of that time they lived in the Philippines.Â Eventually they sold that business and moved to St. Croix.Â ThatÂs when Jim became a casino card dealer.Â He and Trish eventually moved to Las Vegas.Â He continued to work in casinos, but this time moved into surveillance.Â He worked at the casinos until he retired a few years ago.

Clearly, Jim may be modest and unassuming, but he is a guy who's always been open to taking risks and trying new lifestyles.Â Unfortunately, his wife passed away several years ago.Â So he's starting this new adventure on his own.

Helping Jim Prepare for His Move

I can understand JimÂs impatience to start his new life.Â I had waited about seven years before I could afford to leave my career behind and move fulltime to Ambergris Caye.Â My challenges were totally different than JimÂs.Â But the sentiment was the same.Â There are times when we know that we are ready for a major life change.

But - no worries - Mike and I planned to help Jim jump start the tasks that will make his transition a smooth one.Â Since Grand Baymen has all the support services an expat needs, right next door to our properties, everything was at his fingertips.Â From Grand BaymenÂs resort, where he stayed (Exotic Caye Beach Resort), he could walk to most of the places he needed to goÂ 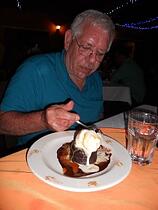 The night that Jim and his friend Larry arrived, Mike and I picked them up and joined them for dinner at our favorite restaurant, Wild Mangos.Â We wanted to catch up with Jim, and also find out what exactly he needed to accomplish during his trip.Â Jim has been our client - but he'll soon be our neighbor.Â (We live directly across from Building A on the Baymen Garden site.) Â So my goal was to map out the tasks he needed help with.Â We like to help point our Baymen Garden owners in the right directionÂ

Island Tour, Banks and the QRP

The next day I took Jim, and his buddy Larry, on a golf cart tour around the island.Â It was easiest to point out, from the vantage of a golf cart, where he could go to accomplish each task.Â (Larry was just along for the ride.Â Of course, he'd be reporting back to his wife later.) Â That day Jim headed directly to Caye International Bank, to get an update on their international bank account options.Â Then he dropped in at Georgetown Trust.Â Trevor helped him to start his Qualified Retirement Person application process.

We asked the resort staff to help set up a physical exam for Jim, with Dr. Lerida Rodriguez. They quickly set up his appointment for the next morning.Â Once he had the exam results, heÂd take it back to Trevor, to submit his QRP application. Trevor explained that Jim should have his QRP status approved by the time he returns in October, to find a rental unit. Â Then Jim will need to go to Immigration to get his QRP card.

In the afternoon I met with Jim to go through his list of questions.Â Now that heÂs serious about moving, he had several pages of detailed questions to address.Â After we slogged through the list, I took the guys over to the REICA office, across the street, to meet CV May.Â We set up an appointment for CV to take Jim out the next day, to look at potential rentals.Â REICA is the realty that represents Grand Baymen condominium properties.Â But they also show and sell other real estate on the island, and on the mainland. 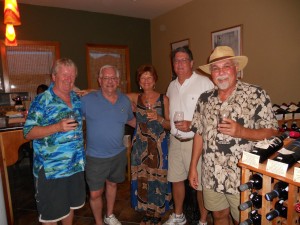 On Friday morning Jim completed his physical and took the results over to Georgetown Trust.Â Then CV drove him around the island to take a peek at several potential rentals.

At 6 PM, Mike and I picked the guys up and headed to Wine de Vine for the Friday night wine tasting.Â This gave them a chance to meet a variety of other expats, and to ask them questions.Â They really enjoyed themselves. And it was a perfect opportunity for Jim to start meeting neighbors and integrating into our communityÂ

Jim and Larry finally took a break on Saturday.Â They joined an organized snorkel trip to Hol Chan Marine Reserve, Ambergris CayeÂs famous underwater park.Â Saturday night we picked them up for dinner at one of our favorite restaurants, the Blue Water Grill.Â We enjoyed our delectable meal while basking in the soft beams of the luminous full moon, as it rose above the shimmering Caribbean Sea. Â Â Over a decadent molten chocolate cake dessert, we enjoyed tales of the guyÂs first encounters with sharks and raysÂ

On Sunday Jim and Larry rented a golf cart to tour the island on their own.Â They finished up their final business tasks on Monday.Â Jim left on Tuesday, feeling confident that when he returns in October, heÂll be able to start his new island life in pretty good orderÂ

We look forward to the day that Jim will be our neighbor at Baymen Garden, once his unit is finished.