From Â July 9-16, the AkÂBol Yoga Retreat and Eco-Resort center held their first ÂlocalÂ Yoga & Wellness Festival.Â AkÂBol opened their resort to the public about five years ago.Â Since then many yoga instructors have held retreats at AkÂBolÂs center.Â But this was the first time that Kirsten Miglio, one of the owners, designed and managed an expanded yoga and wellness program.Â Her goal was to attract both tourists and residents of Ambergris Caye to participateÂ And she succeeded. 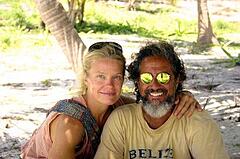 AkÂBol is located on a pristine sugar sand beach, peppered with coconut palms, about two miles north of the bridge.Â Kirsten and husband Milio have created an oasis of tranquility and beauty that blends perfectly with the natural environment. There is nothing pretentious about AkÂBol. Â ItÂs an ideal setting for relaxation and renewal. Â The AkÂBol settings and facilities allow visitors to become one with both nature and selfÂ

The Evolution of Yoga on Ambergris Caye

When Mike and I opened the San Pedro Fitness Club in 2003, there were no resorts or studios offering regular yoga classes on the island.Â So we hired a yoga instructor.Â She taught classes either on the Club roof top, or around the pool...Â As the interest in yoga increased, we held several yoga retreats at the San Pedro Club.

Fortunately, there are now many more options for healthy athletic activities, and classes.Â And the island now has a regular supply of fresh organic produce and other healthy food options.Â ThereÂs a community of devoted yoga practitioners who regularly practice on the island.Â (Some practice regularly in our ClubÂs womenÂs studioÂ) Each year more yoga, tai chi and Pilates instructors appear on the island.

Unfortunately, I had to miss this Ak'Bol retreat.Â I regularly work out at the San Pedro Club.Â But on Sundays I like to drive up north and join the Restorative Yoga class at AkÂBol.Â I really look forward to dropping in at the retreat center.Â Kirsten is a nurturing teacher.Â She has an eclectic practice inspired by many Masters and styles of yoga.Â But her style accommodates beginners through advanced... Each class focuses on breathing & visualization techniques, asana (postures) and guided relaxation/meditation. 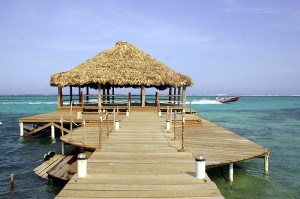 In addition to the yoga class itself, the setting is spectacular.Â Weather allowing, classes are held on the beautiful palapa, built over the Caribbean Sea.Â There is something cathartic about practicing a rejuvenating exercise, such as yoga, while surrounded by the sparkling seaÂ I find it much easier to release all the brain clutter in this environment... And a cool, cleansing breeze blows across the palapa while the group practices their asanas.Â The class ends with a peaceful guided meditationÂ

More About the Yoga & Wellness Festival

After attending the Sunday yoga class last weekend, I caught up with Kirsten.Â She explained that the festival options included yoga, breathing, cleansing, and nutrition classes, and more. They offered a variety of classes during the week, to expose all attendees to the many different dimensions of yoga. Â So the classes were both diverse and complementary.

The festival was open to all levels of students, including beginners. Kirsten told me that they had a good mix of expat residents and tourists in attendance.Â I chatted with one expat in her late 70s who attended the entire week and thoroughly enjoyed it.

Kirsten is already thinking about holding another Yoga and Wellness Festival in early 2012.Â If you would like to read the San Pedro SunÂs detailed article about the recent Yoga & Wellness Festival, just click hereÂ

Combine a Chill Weekend and an AkÂBol RetreatÂ

AkÂBol offers both Âisland chicÂ beach casitas and dorm style accommodations. The food at the Bean CafÃ© is delicious and well priced.Â But, never fear, you can still grab a mojito, or other tropical drink, at their on-site bar, the Shade Bar.Â To find out more about AkbolÂs yoga retreats, click hereÂ