Baymen Garden, Grand Baymen's first condominium project, broke ground in June of 2011. Â Mike and I were pleased to return from our extended vacation in France to find a large construction crew working on the foundation for Building A.

Baymen Garden is the first condominium project being developed as part of the Grand Baymen property. Â The project is located on the four acre property parcel adjoining the San Pedro Fitness Club.Â ItÂs only two blocks from the beach.

Baymen Garden will offer residents a Âgarden environmentÂ free from the noise and traffic of the beach. Â But since Grand Baymen owns the beach front property two blocks away, Baymen Garden owners have access to the beach at the Exotic Caye Beach Resort. (Click here if you'd like more info on the project designs...)

Building A is the first building under construction.Â All units were sold through pre-construction marketing and sales.Â Units in Bldg A have been popular, since this building is very close to the pool. Â Six of the units will face the lovely San Pedro Club pool.Â The upper units on the pool side will also have stunning sunset views over the islandÂs back bay.

Watching Construction from Our Back Door

Mike and I live only a stoneÂs throw from the Northeast corner of Building A.Â We returned to San Pedro, from France, on June 21st.Â ItÂs been impressive to watch the daily progress during the last month.Â One day I counted over 15 laborers working on-site, Â laying concrete. 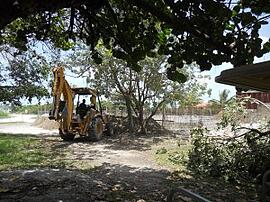 Every day, when I get up and look out my back door, I can see the progress being made.Â We Â can also hear it. Â For every day but Sunday there is a rumble and grind coming from the dump trucks, front end loader, cement mixers, drills, and other equipment operating so close to our back doorÂ

The underground support structure is now in place. Â Steel reinforced concrete piers were set on the bedrock, 8-10 feet below the surface, for stability. Â All intermediate piers were interconnected with solid concrete block walls. Now the foundation is being filled with sand in preparation to cast the concrete first floor slab.

ItÂs rather hard to capture in pictures what has been completed underground. Â But some of the pictures included show the "above the surface" progress.

So, Mike and I are now living in a construction zone. Â Needless to say, weÂre happy to see things moving along quickly.Â And like the Baymen Garden Building A owners, weÂre hoping that Building A will be finished before schedule.

In a future entry, IÂll introduce you to John Morgan, the construction manager hired to oversee this project.Â He moved to Belize from Sacramento, California, in May of this year.Â The actual construction is being performed by Daniel CamalÂs company.Â He is a local contractor who has built a variety of homes and condominiums on Ambergris Caye.Â WeÂve been impressed with some of his other projects, completed on the island. 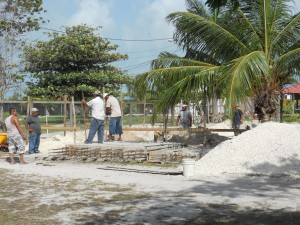 Daniel has a crew of laborers, many of whom primarily speak Spanish.Â Although English is the primary language in Belize, Spanish is the norm here, when it comes to construction crews.Â Many of the laborers on the island come from Mexico, Guatemala, and Honduras.Â ItÂs similar to our agricultural crews in the USAÂ

In the future IÂll provide update blogs to show construction progress for Building A.Â Â ItÂs exciting to see a new building go up, right in front of our eyes.Â Â We look forward to welcoming our new neighbors, as most of these units have been sold already.Â We know each person who will be moving in and look forward to having them as neighbors.

And it is gratifying to contribute to the community by employing so many workers.Â The Town Board is very appreciative that Grand Baymen has awarded the job to a local contractor.

There are still two units available.Â If you are interested, send a quick e-mail to info@grandbaymen.com to obtain specific info about remaining units, and any deals on offer. Â You could be sipping a pina colada on your deck, by the pool, by the summer of 2012!