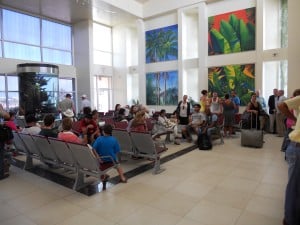 2011 has been a golden year for Ambergris Caye. Tropic Airlines reported that, once again, they broke their own records for the number of flights arriving at the San Pedro, Ambergris Caye, terminal in April. Golf cart rentals were also totally sold out the week before Easter.The trend is indeed encouraging.

In both March and April Tropic Air reported they had been stretched to the limit of their capacity during the 2011 tourist season.Â Fortunately, during the last year they had added a number of new planes to better serve the increase in visitors.Â Â Â

The Belize Tourism Board recently published their first quarter report for tourism statistics in Belize.Â The indications were that a tourism industry recovery is well underway.Â Overnight tourists arriving through the Philip Goldson International Airport in Belize increased by 3.8% during the first quarter of 2011.Â Positive growth was projected for the rest of the year.Â Connect here to an Ambergris Today article...

Another positive factor - Frontier Airlines has signaled that they will commence flights to Belize later in the year.

Easter is Ambergris CayeÂs most popular tourist week.Â ItÂs always a bit crazy here the week before and after Easter.Â For those of us who live here, we always stock up early on supplies, then stay out of town as much as possible.Â It was abundantly clear this Easter week that there were plenty of tourists on the islandÂ

There are also rumors that people who used to vacation in Mexico are now heading to Belize instead.Â Not surprisingly, these days tourists are nervous about their safety in Mexico.Â Belize offers an inviting and more secure alternative.Â

WeÂve been meeting a good number of Baby Boomer tourists who are here to evaluate their options for an appealing, but less expensive lifestyle overseasÂÂ More of them are visiting, and quite a few invest and return to the Isla BonitaÂ

Whatever the reasons, the trend is clear.Â And it is a positive omen for future property prices and rental returns on Ambergris Caye ÂÂ