If youÂve visited Ambergris Caye before, youÂve heard the unmistakable punta rhythms, drum circle beats reverberating from the town square, and the ever present rock and roll bands playing at the beach barsÂ One thing never changes Â thereÂs always music to be heard around San Pedro Town. Better yet, itÂs most often FREE!

But Broadway music Â performed on Ambergris Caye? I must admit, it seems oddly out of place on our laid back, Âno shirt, no shoes, no problemÂ Caribbean island. But that all changed on Friday, March 26, 2011, when a well known Broadway star and two other notable performers sang center stage at Ambergris CayeÂs Paradise Theater.

IÂm still shaking my head in disbeliefÂ For only $17 a ticket, my husband and I enjoyed three hours of first rate Broadway-style musical entertainment. Wandering around the lobby before the performance, and during the break, it felt like we were in an American theater. The difference, though, was that rather than sitting in the nose bleed section and paying $100+ dollars for a ticket, we paid $17 each to sit in the third row.

There were other notable differences. Being Belize, there were no assigned seats. The Âfirst come, first serveÂ approach worked out well for us. And, of course, we were encouraged to bring our alcoholic beverages and food back into the theater, after the break.

A New Theater in Paradise

The Paradise Theater opened in 2010. When driving around town, if you look north across the bridge - you canÂt miss its bawdy colors and exterior art deco design. Intended as a movie theater, this 200+ seat theater seems oddly out of place. On this island we can get almost any current release movie through cable, albeit itÂs a bootlegged version...

But on March 26 the Paradise Theater was the perfect venue for an authentic Broadway style performance! Appreciative expats and San Pedranos flocked to the impressive new theater. We were all anxious to hear Broadway star, Sean McDermott, perform live. But none of us realized we would be treated to an impressive mix of Broadway musical, operatic, classic rock and roll, and country Western tunes.

From Classical to Country

Sean has been the star of musicals such as Miss Saigon, Chicago, and Grease. He even had a guest cameo in the popular Sunday night soap, ÂDesperate HousewivesÂ! He was joined by two other talented singers, James Anest (who performed an amazing operative piece), and Kara Shaw (a country western performer). Learn more about Sean McDermott by clicking here. 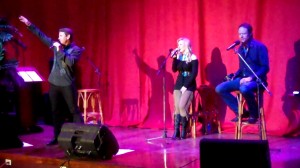 Sean began with a medley of songs that included popular Broadway show tunes such as his rendition of the Phantom of the OperaÂs Music of the Night, and a selection from Elton JohnÂs Lion King. In a duo with James Anest, we were treated to a selection of Frank Sinatra favorites, such as Lady Luck, and ItÂs Not Unusual. But later there was a toe-tapping rendition of Roy OrbisonÂs Pretty Woman. Sean shared a few tunes from his recently released CD. And for the last segment he and James were joined by country music singer Cara Shaw for a country music riftÂ 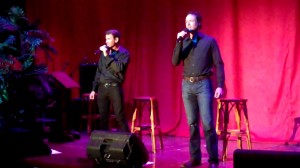 One unexpected operatic duo, with Sean and James, brought tears to my eyes. It was beyond my expectations to hear such a stunning performance in our intimate local venueÂ Remember, I did move to San Pedro from the San Francisco Bay Area. I just accepted that I would have to give up this type of classical performance when I moved here.

So how did this Broadway star come to perform on Ambergris Caye? After all, Sean was one of four Broadway singers hand-picked by Barbara Streisand to replace ÂIl DivoÂ. He sang, at her side, on her 2007 European tour. HeÂs recognized as one of BroadwayÂs leading performers, having starred as Chris in Miss Saigon, Billy Flynn in Chicago, and with title roles in Jekyll and Hyde, Jesus Christ Superstar, Grease, Carousel, and Showboat.

Sean is the son of one of San PedroÂs well recognized American expat businessmen, Corey McDermott. The concert was a benefit for a very good cause, Mama VilmaÂs Family Home. This new non-profit is committed to opening a home for abused women and children. The Mama Vilma Family Home will provide a safe haven, as well as food, clothing, counseling, shelter, medical services and education for children, in particular.

Sean reminisced about his fond memories of summers spent on the island, as a younger man. With his fatherÂs encouragement, he willingly returned to give back to the special community where he always has felt at homeÂ

An Omen of Our Artistic Future

Granted, this type of performance is highly unusual on this island of less than 20,000 residents. But, it may be an omen of things to come. With the new Paradise Theater now open, Ambergris Caye can attract a broader range of musical and performing artists. It seems that many of them donÂt mind performing here if they can combine it with a short break on our paradise island...
I think this performance was a sign that weÂll be seeing more diverse and sophisticated performances on our little island in the futureÂ

For more information, and local articles about the performance check out this San Pedro Sun article.